You may be looking for Nya, the original Samurai X.

P.I.X.A.L. (Primary Interactive X-ternal Assistant Life-form) is a Ninjago minifigure that was introduced in 2014. She is Cyrus Borg's former assistant and Zane's love interest, and the second (current) holder of the Samurai X alter ego.

P.I.X.A.L. was introduced in The Surge, where she took a scan of Zane prior to being taken over by the Overlord; she would then use her scan as the basis for the Overlord's Nindroids. In The Art of the Silent Fist P.I.X.A.L. travels to Garmadon's Monastery with the Nindroids and manages to steal the Techno-blades from Zane but is then captured. He then uses his to free her, and she repairs Zane after he is damaged, though she is initially resistant to his suggestion that they may have something in common. She later has a change of heart and comes to his aid against General Cryptor, and suggest that they are "compatible" before shutting down after the Ninjago power station is disabled. In Blackout she is revived after Zane splits his power source, and as a result gains fighting abilities which are particularly effective when she fights alongside Zane.

In The Curse of the Golden Master P.I.X.A.L. is reunited with her creator Cyrus Borg, and goes off to assist him while Zane and the Ninja go to investigate a new Serpentine ally of the Overlord. She then expresses a desire to be with Zane to her creator, who is fully supportive and informs her that she doesn't belong to him in his mind. In Enter the Digiverse the pair send the Ninja into the digital world to confront the Overlord, providing support along the way; Zane later comforts her after Pythor's forces abduct Borg. In Codename: Arcturus she takes part in the search for the Overlord's remaining forces, and takes Kai to task when he is goofing off.

In The Void P.I.X.A.L. is part of the Ninja's support crew while they are in space, though she and the others are forced to flee Borg Tower when the Overlord and his forces arrive. They later return to the city and join forces with the Ninja in The Titanium Ninja, though P.I.X.A.L. doesn't take part in the fighting. She was later heartbroken when Zane sacrificed himself to stop the Overlord and was unable to bring herself to attend his memorial, but then discovered that he had somehow uploaded himself into Borg Tower's systems.

From A.I. to Samurai

As a result of the Tournament of Elements arc, P.I.X.A.L. becomes a support A.I. in Zane's new body, giving him advice on various situations.

P.I.X.A.L.'s support role would continue throughout the Possession season and briefly into Skybound, though Nadakhan's machinations resulted in her disappearance. This would later be undone by Jay's third wish, and P.I.X.A.L. would assist Zane during Day of the Departed, particularly during his battle with the revived Cryptor. She would later identify the temporal disturbance that had affected Ninjago in The Hands of Time, and pinpoint its epicenter as the Monastery of Spinjitzu. She later became insistent on Zane saving Cyrus Borg when he was threatened by a Vermillion; after Zane was knocked offline by the Time Twins, P.I.X.A.L. briefly endeavored to help repair him but subsequently disappeared, with Zane believing she had gone offline.

Following a Vermillion attack on the Samurai X Cave, Nya noticed that her Samurai X armor was missing, and came to believe that it had been stolen by the Vermillion. However, during the assault on the Temple of Airjitzu, the Samurai Mech came to Lloyd's rescue before being shot down by the Vermillion. Believing that the new Samurai X was still in operation, Nya eventually traveled back to the cave and found Samurai X there and demanded that they reveal their identity. Samurai X used voice modulation to speak in the voices of Ronin, Dareth, Wu, Misako, Garmadon, Kai, Cole, and Nya herself, initially in an attempt to deceive Nya but eventually to plead with her to allow the secret to be kept. Moved by the Samurai's conviction and impressed by their fighting ability, Nya gave the Samurai her blessing but insisted on them adopting a new color scheme; she also briefly believed the Samurai to be Skylor but later discovered that this was not the case.

Samurai X later came to the aid of Jay, Zane, and Cole to rescue Cyrus Borg from the Vermillion, having altered the armor color scheme and that of a vehicle Nya had provided. Admitting to hacking into Zane's scanners, the Samurai then helped in their efforts to sabotage the Iron Doom and prevent it from escaping into time. Samurai X proved to be quite knowledgeable, knowing the complete coding sequence for programming a Nindroid and rattling it off alongside Zane, only to be thwarted when Acronix and Krux appeared with the Time Blades. After they departed with the Vermillion with Kai, Nya, and Wu in pursuit, Jay attempted to persuade Samurai X to identify but was unsuccessful, a performance repeated after Kai and Nya returned from saving time from being altered.

P.I.X.A.L. reappears in The Mask of Deception, where she provides support to Lloyd as he is pursuing the Sons of Garmadon and contacts the rest of the Ninja in order to reunite them. Samurai X appears in The Jade Princess, using the Samurai VXL and saving a group of civilians from the Sons of Garmadon. In Dead Man's Squall, after the Destiny's Bounty 3.0 systems are compromised due to Mr. E's actions, Samurai X attacks the ship in a mech, and P.I.X.A.L. admits that she has been the new Samurai the entire time. She is eventually able to regain control of her body, and confesses her actions to Zane. In The Quiet One Nya confirms that the Samurai X identity is hers now, and Zane assures her that he would never force her to return to being a computer program inside his mind.

In "The Darkness Comes", P.I.X.A.L. accompanies Zane and Cole in the Earth Driller to a ceremony in which the city gives the Ninja a new Destiny's Bounty. When the Oni invade Ninjago, P.I.X.A.L. accompanies the Ninja aboard the new Bounty, and they reluctantly travel to Kryptarium Prison to recover their unlikely ally, Emperor Garmadon. In "Into the Breach", she remains aboard the Bounty when Lloyd and Garmadon head into the city, and is heartbroken when Lloyd's camera shows a petrified Cyrus Borg. When the crew pick up a distress signal, P.I.X.A.L. summons her mech and remains behind to support the father-and-son team.

In "The Fall" Lloyd contacts P.I.X.A.L., who flies in to pick him and Garmadon up only to find that her wait has nearly emptied her fuel. She manages to pick up the pair, and barely manages to make an emergency landing on the Bounty. After receiving the crushing news that Cole has apparently been lost, the group heads back to the Monastery of Spinjitzu. In "Endings", P.I.X.A.L. and Misako hang back with rescued civilians while Wu, Garmadon, the Ninja, and Faith hold off the Oni army. When the defenders are successful-joined by Cole, who survived after all-P.I.X.A.L. joins in the victory celebration

In "A Rocky Start", some months after the victory against the Oni, P.I.X.A.L. shows the Ninja the Monastery's new vehicle bay, which she has been working on while the Ninja slacked off. She then shows the group several new vehicles-the Dune Bounty, Rock Cycle, and Katana 4x4-only for them to rush off before she can explain how they work. In "The Belly of the Beast", the Ninja attempt to contact her after running into trouble in the Desert of Doom, but are unable to reach her. In "The News Never Sleeps!", P.I.X.A.L. enters her mech to battle Aspheera's army of flaming snakes. Comments by Lil' Nelson and Antonia suggest that P.I.X.A.L.'s identity as Samurai X isn't widely known, with the pair both referring to the hero as male.

In "Ninja vs. Lava", P.I.X.A.L. arrives to save the Ninja from Aspheera's magical lava in the ShuriCopter, bringing them up to date on the situaton in Ninjago. In "Never Trust a Human", P.I.X.A.L. is present as Wu relates his troubled history with Aspheera. In "Under Siege" and "The Explorer's Club", she activates the Monastery's defenses to hold off Aspheera's army, retreating with the others to the weapon bay. Waiting for Lloyd, Nya, and Zane to arrive with one of the Scrolls of Forbidden Spinjitzu, they race to complete the Titan Mech.

In "Vengeance Is Mine!", P.I.X.A.L. pilots the newly completed mech against Aspheera's army, but is unable to match her use of a Scroll of Forbidden Spinjitzu. Fortunately, Zane's party arrives with the Scroll and the snakes are defeated, only for Zane to apparently be vaporized as a result. In "A Cold Goodbye", P.I.X.A.L. mourns her fallen love, but later assists the Ninja in attempting to follow him when they learn that Zane was sent to the Never-Realm, not destroyed. After subduing Wu, she uses the one scroll remaining in Ninjago to send the Ninja on their way, only to learn afterwards that they and Zane may all trapped forever.

In "The Message", Lloyd finds a recording left by Zane in which he bids farewell to P.I.X.A.L.; he is seen making this recording in "Corruption." In "The Kaiju Protocol" P.I.X.A.L. and Wu attempt to use Traveler's Tea to open a portal to the Never-Realm. After a number of failed attempts, they accidentally open a portal to the Departed Realm, and the Preeminent escapes and begins attacking Ninjago. P.I.X.A.L. engages it using her Protocol Kaiju mech, but is forced to plug into the Ninjago City power grid to overcome it. Luckily, her systems survive the immense surge of power and she defeats the Preeminent; after returning it to the Departed Realm, she encourages Wu regarding their efforts.

In "Awakenings", P.I.X.A.L. and Wu are present when the Ninja succeed in opening a portal back to Ninjago, and joyfully embraces Zane after he emerges. 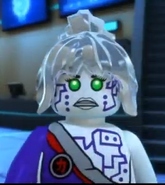 P.I.X.A.L. in the Ninjago: Masters of Spinjitzu TV show 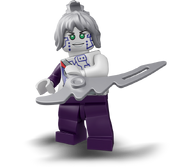 Retrieved from "https://brickipedia.fandom.com/wiki/P.I.X.A.L.?oldid=1995341"
Community content is available under CC-BY-SA unless otherwise noted.
... more about "P.I.X.A.L."
RDF feed
Accessories
Blade
Two Golden Katana +
Appearances
70724 NinjaCopter
70625 Samurai VXL
70642 Killow vs. Samurai X +
ArticleRating
3 +
Image
70642-samuraix.png +
Img1
Pixal.jpg +
Img2
70625 samurai x.png +
Img3
70642-samuraix.png +
Img4
P.I.X.A.L Nanofigure.png +
InfoboxTemplate
Minifigure +
ShopDescription
P.I.X.A.L.(Primary Interactive X-ternal As … P.I.X.A.L.(Primary Interactive X-ternal Assistant Life-form) is Cyrus Borg’s android assistant.</br>When she first meets the ninja, she is under the influence of the Digital Overlord and uses her skills to copy the plans for Zane so the Nindroids can be built.</br>She is cold and mechanical and incapable of any feeling for anyone.</br>P.I.X.A.L. is actually the 16th model in her line, the first 15 having malfunctioned due to a faulty thermo-coil and a malfunctioning AIE-ES (artificial intelligence enhancer-emotion suppressor) chip.</br>Borg was able to fix the coil, but the chip problem has not been completely solved.ip problem has not been completely solved. +
Theme
Ninjago +
Title
P.I.X.A.L. +
Txt1
P.I.X.A.L. (corrupted face) +
Txt2
Hands of Time +
Txt3
Sons of Garmadon +
Txt4
Nanofigure +
Years
2014
2017
2018 +