Padmé Amidala, also known as Padmé Naberrie and Queen Amidala, is a Star Wars minifigure first released in 1999. She has appeared in multiple sets, with 6 minifigures depicting 4 different variants. Padmé is the wife of Anakin Skywalker and the mother of Princess Leia and Luke Skywalker.

In 1999, Padmé Amidala appeared in two sets, both depicting her in her Tatooine clothing from Star Wars Episode I: The Phantom Menace: 7131 Anakin's Podracer, and 7171 Mos Espa Podrace. Each variant in both sets had a brown, braided headpiece, a yellow face, a blue torso with printing on it depicting Padmé's Tatooine clothes, and black legs.

In 2011 a redesigned version of Padmé in her Tatooine clothing was released in 7961 Darth Maul's Sith Infiltrator. In this variant Padmé has the same braided hairpiece, and her face is now flesh-toned and double-sided. One side has her smiling, and the other side has an angry expression. The torso is similar to the old version but with some minor updates. Once again her legs are black.

In 2012, two new variations were released, in 9499 Gungan Sub and 9515 Malevolence. In the Gungan Sub, Padmé was dressed as Queen Amidala, with a new headpiece and a face was white with make-up details. The torso is bright red with printing depicting her royal garb. The minifigure utilises a special piece for her unique dress. In the Malevolence, Padmé was in her Clone Wars variant. Her hairpiece is the same as Will Turner and Philip Swift. She has a red torso with printing, and the arms and legs are a beige colour.

In the second wave of 2013, Padmé appears in the white clothes she wears in the Geonosian Arena, including scratch marks on her back from the Nexu beast. This variant of Padmé comes with a flip face, one showing an large smiling face, the other depicting a smirk. Padmé also comes with a new hairpiece that is currently exclusive to her. She is set to appear in 75021 Republic Gunship [1].

Padmé was one of the youngest Queens in Naboo history, and was in office during the Crisis of Naboo. When the Trade Federation invaded the planet, she escaped along with R2-D2, Jar Jar Binks, Qui-Gon Jinn, Obi-Wan Kenobi, and Captain Panaka. While on Tatooine, Padmé first met her future husband, young Anakin Skywalker. After leaving the planet and landing on Coruscant, she realized that corrupt politicians would not help her situation, so she, along with her Jedi protectors and friends, left Coruscant and traveled back to Naboo. After retaking the Palace on Naboo and capturing Nute Gunray, peace returned to the planet.

Ten years later, an assassination attempt was made against her, and soon the Clone Wars began. During the same time, immediately after their capture and trials on Geonosis, Anakin and Padmé returned to Naboo to get married. However, at the height of the Clone Wars three years later, Padmé revealed to Anakin that she was pregnant and later discovered that her husband turned to the Dark Side. She traveled to Mustafar and tried to persuade Anakin to come back to the light side but to no avail. When Obi-Wan stepped out of her ship, her husband accused her of bringing Obi-Wan to kill him. Anakin then knocked her out after Force strangling her. After dueling Anakin and leaving him for dead, Obi-Wan came back and brought Padmé to Polis Massa where she gave birth to Luke Skywalker and Leia Organa. Right after she gave birth to them, she died of a broken heart.

Padmé with a blaster.

Padmé from the Clone Wars.

Padmé dressed as Queen Amidala in the Videogames.

Anakin, Padmé, and Obi-Wan in the Videogames.

Padmé pregnant with Luke and Leia in the Videogames. 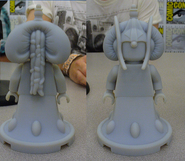 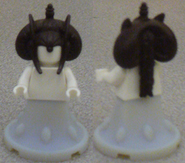 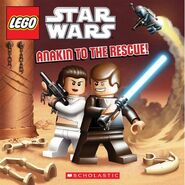 Padmé in the book, "Anakin To The Rescue" 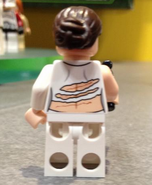 Padmé with scratches on her back from the nexu Beast

Padmé's hairpiece.
Add a photo to this gallery