Padma Patil is a minifigure that first appeared in LEGO Harry Potter: Years 1-4. She has an identical twin sister named Parvati Patil. In her fourth year she went to the Yule Ball with Ron Weasley. In her fifth year she joined the D.A., an organization led by Harry Potter. Her minifigure was physically released in the 2020 Harry Potter Advent calendar. 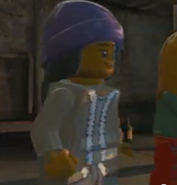