Brickipedia
Register
Don't have an account?
Sign In
Advertisement
in: Class 3 articles, Minifigures (theme), Minifigures introduced in 2013,
and 3 more
English

The Paintballer is a Minifigures Series 10 minifigure released in May 2013.[1]

The paintballer has grey legs, a grey waist, a grey torso, grey arms, and yellow hands. Printing on his torso gives the appearance of a zipper, a zippered pocket, and padding. There are also lime green splotches covering the front of his torso and legs, giving him the appearance of having been hit by paint balls. He also has a orange splotch on this back. His face is yellow and he has black eyes; white pupils; black eyebrows; and an open, grimacing mouth, all of which combine to give him an aggressive expression. He is wearing a black helmet, which also has a lime green splotch, with a white goggles piece and carries a black paintball marker. Both the paintball marker and helmet are new moulds. 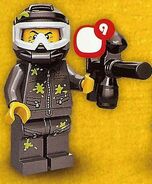 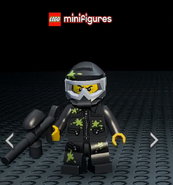