Brickipedia
Register
Don't have an account?
Sign In
Advertisement
in: Class 4 articles, Minifigures introduced in 2014, The LEGO Movie Minifigures,
and 4 more
English

"I only build in black…and white…and bamboo."
―Panda Guy

Panda Guy is one of the characters in The LEGO Movie.

The Panda Guy makes a cameo appearance in a news bulletin that is presented by the reporters.

The Panda Guy makes a speaking cameo appearance as a resident of Appocalypseberg, helping defend Emmett, Lucy, and Ultrakatty from General Mayhem's ship. 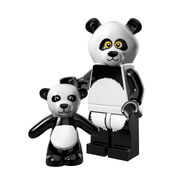 Panda Guy as seen in The LEGO Movie

Panda Guy as seen in The LEGO Movie 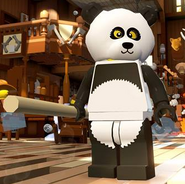 Deutsch Français
Community content is available under CC-BY-SA unless otherwise noted.
... more about "Panda Guy"
RDF feed
Accessories
Panda stuffed animal +
Appearances
71004 The LEGO Movie Series
The LEGO Movie +
ArticleRating
4 +
Image
Panda_Man.jpg +
InfoboxTemplate
Minifigure +
ShopDescription
“I only build in black…and white…and bambo … “I only build in black…and white…and bamboo.”</br></br>Most believe the Panda Guy to be a simple mascot in a panda bear costume. But in times of trouble, he reveals himself as an undercover Master Builder who has sworn to free the citizens of Bricksburg from the shackles of instructions-based rules and conformity.</br></br>The Panda Guy is determined to foil Lord Business’s evil plots, although he has never succeeded so far. In his attempts to break into the Octan office tower, he hasn’t yet made it past the laser gates, let alone the sharks and the laser-sharks. Maybe the long-awaited Special will finally be the answer to completing his mission!y be the answer to completing his mission! +
Theme
The LEGO Movie +
Title
Panda Guy +
Years
2014 +
Advertisement