Pankot Guard is a character in LEGO Indiana Jones: The Original Adventures and LEGO Indiana Jones 2: The Adventure Continues. He carries a sword for a weapon and a red turban (although in the second game it has a golden streak on it). They attacked Indy and his friends in the dining room in both games (even though they were not evil in the movie). Also in the first game they locked the cage doors before the sacrifice was lowered into the lava. 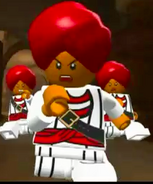 Pankot Guards
Add a photo to this gallery
Retrieved from "https://brickipedia.fandom.com/wiki/Pankot_Guard?oldid=1921040"
Community content is available under CC-BY-SA unless otherwise noted.