This article is about the collectable Friends animal. For the parrot commonly used in the Pirates theme, see Bird.

The Parrot is an animal released in 2013 for the Friends theme.

The parrot has small lime green feet, lime green wings and a lime green tail. Its eyes are black and slanted, and its beak is orange. It has short plumes protruding from the back of its head. It stands on a single stud. 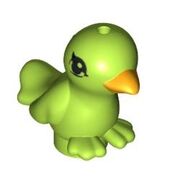 The parrot presented at the Toy Fair

Français
Community content is available under CC-BY-SA unless otherwise noted.
... more about "Parrot"
RDF feed
Appearances
41024 Parrot's Perch
41044 Macaw's Fountain +
ArticleRating
4 +
Image
birdfriends.jpeg +
InfoboxTemplate
Minifigure +
ShopDescription
The Parrot
I talk. A lot. But I also like to have some quiet time to think once in a while. I love to soak up the sun from my perch, sing, or eat my snacks. +
Theme
Friends +
Title
Parrot +
Years
2013 +
Advertisement