The head is olive green and oddly shaped, with a brow that slants downward two black eyes on each side, one larger than the other. Each eye has four red dots in the centre. The mouth consists of four wide, blunt teeth, two on each side. The forehead's mould depicts wrinkles or overlapping dermal plates. They are lined with dark green. At the top, the head forms into three prongs much like a crown. The back stretches into a "head-tail", draping down below the level of the head. 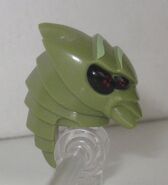 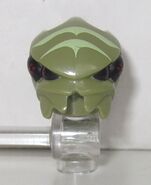 Back view
Add a photo to this gallery

Retrieved from "https://brickipedia.fandom.com/wiki/Part_12981?oldid=1264491"
Community content is available under CC-BY-SA unless otherwise noted.