Part 2570 is a crossbow, a Castle/Star Wars weapon that shoots arrows. Unlike a regular bow, it is wound up and has an arrow loaded in to it. The result is a high-speed arrow that can easily kill an average man. It appears in many Castle sets. One also acts as Chewbacca's bowcaster in many Star Wars sets like the 10188 Death Star. Strangely, the stirrup used for reloading is too small for a minifigure's foot.

The crossbow was a powerful weapon used by Archers and Knights, however it took a significant amount of time to reload it.

Rubeus Hagrid was known to have carried a crossbow on occasion when outside, especially when venturing into the Forbidden Forest.

A Bowcaster was a Wookiee made projectile weapon. Then when a quarrel (bolt) was fired, it released was enveloped in energy. Chewbacca was known to use a bowcaster on many occasions. So was Embo.

Ann Lee's trusty weapon is the crossbow which she shoots harpoons out of to stop the monsters such as ghosts and mummies.

Stone Army scouts used these as their weapons. 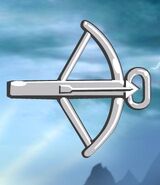