Part 30368, official name Darth Vader Helmet, is a Star Wars piece introduced with the theme in 1999. The helmet fits onto Darth Vader's head and appears on nearly every variant of the Sith Lord. The piece was usually released in black, and it was also released in chrome black to celebrate the 10th anniversary of LEGO Star Wars. 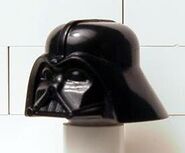 Retrieved from "https://brickipedia.fandom.com/wiki/Part_30368?oldid=1567017"
Community content is available under CC-BY-SA unless otherwise noted.