Part 40240 is a LEGO minifigure hair piece released in 2001. It was used first for Ron Weasley and Professor Flitwick from Harry Potter, and then later for Ori from The Hobbit in 2012. In 2018 it was used for Credence Barebone.

Part 40240 is dark brown LEGO minifigure hair piece. It has several creases coming from the top centre to the bottom of the brick. At the front the hair goes down to a LEGO minifigure's eyebrow level. It then slopes backward to the back of the head which is hidden by the brick. 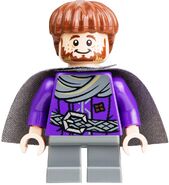 Ori
Add a photo to this gallery