Part 95057 is a piece primarily used as a viking helmet which is exclusive to the Viking from 8804 Minifigures Series 4.

The helmet has a rim at the bottom that slopes down as it goes to the back of a minifigure head. At the front is a part going down that fits between a minifigure's eyes. The helmet has four 'strips' going upward from the front, back, and sides of the piece to the top to create a point. On the front and back stripes are six (three on the front and three on the back) diamond-shaped part giving detail. The area in between each of the four stripes is filled in. Near the bottom of the two side stripes are two holes for connecting pole pieces such as horns into it to depict a viking helmet. The pole pieces cannot go completely through the helmet as the part where the minifigure head connects onto the helmet prevents a pole from doing so. 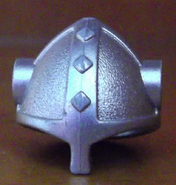 Front view of the helmet 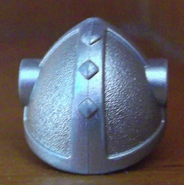 Back view of the helmet 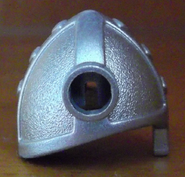 Side view of the helmet 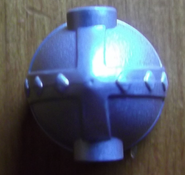 Top view of the helmet

A silver helmet with gold horns as seen in the Viking from 8804 Minifigures Series 4.
Add a photo to this gallery
Retrieved from "https://brickipedia.fandom.com/wiki/Part_95057?oldid=1232243"
Community content is available under CC-BY-SA unless otherwise noted.