Her best friend is Lavender Brown and she and her sister went with Harry Potter and Ron Weasley to the Yule Ball. She was also a Gryffindor student at Hogwarts School of Witchcraft and Wizardry, while Padma was a Ravenclaw. Parvati became best friends with Lavender Brown, with whom she shared many interests, such as a love for Divination. Parvati attended the Yule Ball with Harry Potter in 1994, and a year later she joined Dumbledore's Army, an organization founded and led by Harry. During her seventh year, she continued her studies at Hogwarts, when it was under the control of Lord Voldemort. Parvati fought at the Battle of Hogwarts in 1998, against Voldemort and his Death Eaters. Her life after the Second Wizarding War is unknown. They both joined Harry, Ron, Hermione Granger, and several other Hogwarts students to form Dumbledore's Army in an attempt to rebel against Professor Umbridge. [1]

To unlock Parvati Patil, go in Professor Lupin's (Gilderoy Lockhart's in year 2) shoot the four books...two on the shelves one on the staircase and one inside a bookshelf. You need a book character (ex: McGonagall, Hermonie, & Dumbledore).

Shoot the three spiderwebs in Moody's room (year 4 only). One spiderweb can be found above the door on the staircase and the other 2 are found on beams on the roof. 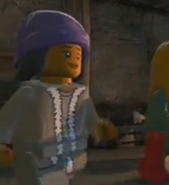