Pascal is a chameleon released in the Disney Princess theme in 2014. So far he has appeared in three sets.

Pascal uses an entirely new mould. He is in standing position with bent back and a raised tail coiled in a spiral. All of his four small feet are placed on the ground, slightly bent and pointing outwards, which have three toes each. The reptile's body is bright green with dark green curves printed around his eyes. The creature looks straight ahead with his brown eyes. Some accessories, like a bow, can be attached to Pascal's head.

Pascal is Rapunzel's pet chameleon. He lives with her in a Creativity Tower. As a known colour-changer a chameleon is a symbol of Rapunzel's interests in art and her painting skills. 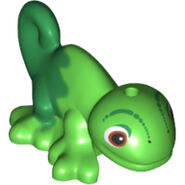