Patty Keys is a minor character in Ninjago: Masters of Spinjitzu who will also appear in The LEGO Ninjago Movie.

Patty Keys uses Nurse's hair piece in black. Her torso is pink with a shirt and grey necklace and she has purple feminine curves. Her feet are grey.

Patty Keys made multiple appearances in the first season of Ninjago as a background character. However, she did not make an important cameo until the second season.

Patty Keys was first introduced in the episode "Darkness Shall Rise". She was a real estate agent that the Ninja contacted in order to find a location to train Lloyd Garmadon, the future Green Ninja.

She first showed them a dingy, one-room apartment, which she claimed was a "cozy dream". The Ninja were not impressed when they saw it. However, Patty Keys informed them that it was all they could afford. Cole opted to take the apartment, but Jay and Kai said they needed a better place to train Lloyd Garmadon. Keys then took the Ninja to the "Hero Suite", a room atop the building. The suite had floor-to-ceiling windows, a dragon keep, and a state-of-the-art video game console. Cole said that the ninja could not afford the room, but Keys told them that they deserved it. The Ninja decided it was not the best place to train Lloyd. However, she changed the Ninja's mind after she them the indoor-training room.

Unfortunately, the Ninja could not pay for the suite in time, and they had to take Keys' other option, the one-room apartment.

In "The Temple on Haunted Hill", Patty Keys appeared as a tour guide. 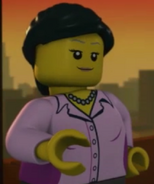