In the LEGO Batman Movie sets, they are represented by the Wildlife Photographer's penguin piece, but with red eyes and robotic arm backpack attachments. 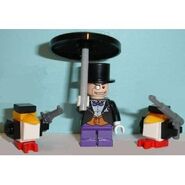