Pepper Potts is a Marvel Super Heroes minifigure released in 2013 who is the main love interest of Tony Stark and CEO of Stark Industries.

Pepper has a long dark orange ponytail with a strand of hair on either side of her face in the front. She has a double sided freckled face depicting happy and scared expressions and wears dark red lipstick. She has an all-white body with flesh hands. Her torso is printed with her jacket, with part of her chest revealed and a neck bone, and dark grey feminine curves. Her back printing is of the same dark grey feminine curves and the creases in her jacket.

Pepper is shown on the box for 76007 Iron Man: Malibu Mansion Attack as wearing the Mark 42 Armour.

Virginia "Pepper" Potts was the personal assistant to Tony Stark and did all that he required. After Tony came back from captivity, she became more involved in his life. She found out that Tony was Iron Man and was a primary target of Iron Monger. She overloaded the arc reactor in an attempt to help Tony win the battle.

After Tony announced that he was Iron Man to the world, she became increasingly worried about Tony's reckless behavior and Stark appointed her to CEO of Stark Industries. In secret, he was dying of a Palladium poisoning from his chestpiece, which he didn't tell her about. She was present at the battle between Iron Man, War Machine, and Ivan Vanko. Stark saved her from an exploding Hammeroid, and Pepper left her position as CEO. Tony and Pepper then started a serious relationship.

She later helped Tony build the prototype for Stark Tower. When Agent Coulson came to recruit Tony to look over Erik Selvig's notes, Pepper left for D.C. She became worried when she found out Tony was in the battle between Loki, the Chitauri, and the Avengers. Tony tried to call her when he was about to sacrifice himself, but she didn't answer it as she was busy watching the battle on TV aboard a plane and didn't hear it vibrating. After the battle, she helped Tony design and improve the damaged Stark Tower.

Tony once again made her the CEO of Stark Industries as Tony was hidden away in his lab and she felt that Tony wasn't paying enough attention to her.

She was reintroduced to Aldrich Killian (whom she used to work for at A.I.M.) when Killian returned to ask Stark Industries for funding for his Extremis project, which she declined.

During The Mandarin's attack on Tony's mansion, she donned the Mark 42 Armour and Tony ordered her to get herself and Maya Hansen out of the crumbling house. Once they were safely out, Tony called the armour back to him and failed to stop the attack. She was devastated when she believed Tony was dead, but Tony left her a voicemail, telling her not to worry.

Maya and Killian then kidnaped and injected her with the Extremis serum. When Tony came to rescue her, he found her crushed by rubble. Killian then attacked and Pepper fell off the platform, into the fire below. She survived though due to the Extremis serum, and killed Aldrich. Tony and Pepper kissed while the Iron Man suits blew up in the background and Tony promised to do what ever he could to fix her condition, which he successfully did.

In the comics, Pepper is given armour similar to Iron Man's. While wearing it, she is called Rescue. 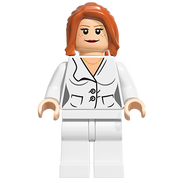 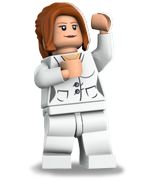 Pepper in the Mark 42 Armour