Pepper Roni is the star of the LEGO Island trilogy. He is a young delivery boy who delivers pizza to the citizens of LEGO Island. According to his card in LEGO Island Xtreme Stunts, his favorite colour is tomato red. He is a skateboard pro who can't read or spell very well, however he is surprisingly great at math. Because of his poor literature ability, he was taught to read by the police officer Laura Brick.

Pepper is the delivery boy who delivers pizza to the citizens of LEGO Island. His father, Bolonga Roni, was an explorer who vanished mysteriously one day. Pepper was adopted by Mama Brickolini and Papa Brickolini.

As Pepper arrives at the Pizzeria, he is given the task of delivering a pizza to the jail by Papa Brickolini. When Pepper delivers the spicy pizza to the Brickster at the jail, the criminal uses the fumes of the pizza to unlock the jail door, and then escapes in the nearby police helicopter. Pepper gives chase to the Brickster and finds the pieces necessary to rebuild the helicopter, after the Brickster leaves some of the pieces scattered across the island, after he steals bricks from many of the island's buildings and structures. With the help of Nick Brick, his sister Laura, and Papa's helicopter mounted Turbo Pizza (and Donut) Chucker, Pepper is able to trap the Brickster, allowing Nick Brick and Laura Brick to close in and arrest him. At the end, the Brickster is put back in jail, and Pepper is commended for his efforts by every resident on the island.

Papa Brickolini once again gives Pepper the task of delivering a pizza to the jailed Brickster. The Brickolinis assure Pepper that it is safe, because the pizza is not the spicy kind that the Brickster would need to break out of jail. When Pepper delivers the pizza however, the Brickster adds his own spices, then uses the pizza to melt the lock on his cell. He escapes in a nearby helicopter (once again), and proceeds to steal the Infomaniac's Constructopedia. This causes the destruction of all of the buildings on LEGO Island. (Although Pepper is mainly upset because the Brickster did not pay for the pizza, he is perfectly ready and willing to also catch the Brickster to keep him from hurting innocent people). Pepper is then tasked with recovering all of the Constructopedia pages, and once again capturing the Brickster. After chasing him from island to island, Pepper catches up to him on the Brickster's own Ogel Island. Pepper then defeats him using Papa's New White Hot Ogel Special pizzas, and subsequently returns with Mama and Papa Brickolini, victorious, to a rebuilt LEGO Island.

Pepper is the lead stuntman in the new action movie Xtreme Stunts, which is being filmed and premiered on LEGO Island. The Brickster has also been let out of jail, in order to star as the villain for the movie, and has most of the islanders convinced that he has reformed, except for Pepper, Nick Brick, and the Infomaniac. Throughout the game, Pepper undergoes several stunts to pull off, but is triumphant in each. At the conclusion of the filming, the Brickster reveals that he and his Brickster-Bots have built a tower structure that can control every brick on the island. Pepper immediately races to the tower, avoiding several obstacles to make it to the top. Pepper once again manages to defeat the Brickster, and his friend, Sky Lane, shuts down the tower. As a result, The Brickster is put back in jail. However he escapes once again to attend the premiere of the new movie that he recently starred as the villain in, where he sits in utter embarrassment in front of almost everyone on LEGO Island, as Pepper is seen heroically foiling the Brickster's plans. Unlike the first two game's Pepper is now mostly a silent hero, but can say exclamations when doing stunt work.

In the LEGO Microgame, a tutorial project for the Unity game engine co-developed with LEGO, one of the four default playable minifigures is a "Pizzaboy" clearly modeled after Pepper. He uses Ronny's shirt from Hidden Side (himself a reference to Pepper), with sleeves, legs, and a hat/hair piece that more closely resemble the original character. Changing the player character is the subject of one of the tutorials on the Unity website.

Pepper in the original LEGO Island 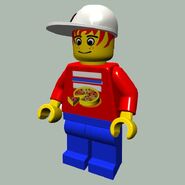 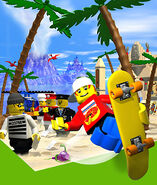 Some speculate that this minifigure from 7641 is a younger version of the Pepper character. 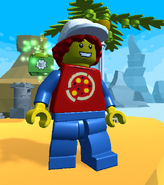 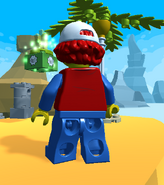 Several designs for the main characters of LEGO Island, including Pepper Roni

An ad with an early design for Pepper

Concept art for Pepper in the first LEGO Island game 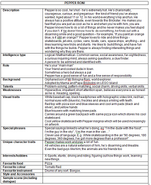