Pepper Roni is the star of LEGO Island. He is a young delivery boy who delivers pizza to the citizens of LEGO Island. His father, Blonga Roni, was a great storyteller who vanished mysteriously one day. Pepper was adopted by Mama Brickolini and Papa Brickolini. According to his card in LEGO Island Xtreme Stunts, his favorite color is tomato red. He is a skateboard pro who can't read or spell very well, but is great at math.

When Pepper delivers a spicy pizza to the Brickster, the criminal uses the fumes of the pizza to unlock the jail door, and then escapes in the nearby police helicopter. Pepper gives chase to the Brickster and finds the pieces necessary to rebuild the vehicle. With the help of Nick and Laura Brick and Papa's helicopter mounted Turbo Pizza Chucker, Pepper is able to re-capture the Brickster.

Papa Brickolini once again gives Pepper the task of delivering a pizza to the jailed Brickster. The Brickolini assure Pepper that it is safe, because the pizza is not the spicy kind that the Brickster would need to break out of jail. When Pepper delivers the pizza however, the Brickster adds his own spices, then uses the pizza to melt the lock on his cell. He escapes in a nearby helicopter, and proceeds to steal the Infomaniac's Constructopedia. This causes the destruction of all of the buildings on Lego Island. Pepper is then tasked with recovering all of the Contructopedia pages, and once again capturing the Brickster. After chasing him from island to island, Pepper catches up to him on the Brickster's own Ogel Island. Pepper then defeats him using Papa's New White Hot Ogel Special pizzas, and returns victorious to a totally rebuilt Lego Island.

Pepper is now a teenager and the lead stuntman in the new action movie Xtreme Stunts, which is being filmed on Lego Island. The Brickster has been let out of jail in order to star as the villain. At the conclusion of the filming, the Brickster reveals that he has built a tower that can control every brick on the island. Pepper races to the tower, avoiding several obstacles to make it to the top. Pepper once again defeats the Brickster, and his girlfriend Sky Lane shuts down the tower. The Brickster is jailed again, but escapes once more to attend the premiere of the new movie. 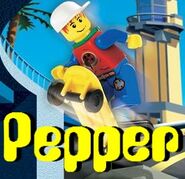 Add a photo to this gallery
Retrieved from "https://brickipedia.fandom.com/wiki/Pepper_Roni?oldid=547933"
Community content is available under CC-BY-SA unless otherwise noted.