Percival Graves is a Fantastic Beasts minifigure introduced in LEGO Dimensions in 2016.

Percival Graves was an Auror, Director of Magical Security and head of MACUSA's Department of Magical Law Enforcement in the 1920s. He was later replaced by Gellert Grindelwald and presumably killed as a result. 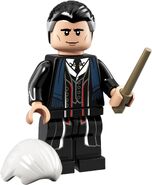