Brickipedia
Register
Don't have an account?
Sign In
Advertisement
in: Class 3 articles, Spider-Man minifigures, Minifigures introduced in 2002,
and 2 more
English

Peter Benjamin Parker is a Spider-Man minifigure first introduced in 2002 in the Studios Theme. He has appeared in six sets, each with a different variation. He is the secret identity/alter-ego of Spider-Man.

Peter is the nephew of Aunt May and love interest to Mary Jane. He was a high-school scholar who was bullied often by other students. During a field trip to an arachnid museum, he was bitten on the hand by a genetically altered spider, giving him superhuman strength and the ability to cling to surfaces. In the film it also gave him the ability to sling webs rather than use web cartages. With his powers, he became Spider-Man and avenged his uncle's death as he took on villains such as Green Goblin and Doc Ock. He is a freelance photographer for the Daily Bugle. 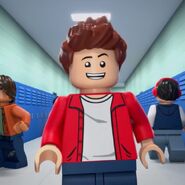