Peter Pettigrew, also known as Wormtail (and as Ron Weasley's rat Scabbers) was a Death Eater in the service of Lord Voldemort. He was an Animagus (a wizard who could change into an animal) and for years he hid pretending to be Ron's pet rat Scabbers.

Peter Pettigrew, known as "Wormtail", attended Hogwarts and was sorted in Gryffindor. Growing up he was friends with James Potter, Sirius Black, and Remus Lupin. He was a member of the original Order Of Phoenix. In truth, he was a double agent for Voldemort. While working for the Dark Lord, he gave the location of the Potters to his master, the Dark Lord, resulting in the deaths of Lily Potter and James Potter. He was known to be cowardly and begged for his life in Harry Potter and the Prisoner of Azkaban.

He brought Lord Voldemort back to life by taking Tom Riddle Sr.'s bones, sliced his own hand off and sliced Harry Potter's arm to get blood on the graveyard. Voldemort gave Wormtail a magical hand as a thanks for getting his body back. This hand was much more powerful than Wormtail's original hand.

In Harry Potter and the Deathly Hallows, Wormtail tried to choke Harry to death with it, but Harry got through to the old Peter Pettigrew, and put some doubt in his mind about his life choices. The hand however, was still pure evil, and was cursed with a fail-safe that would activate if Pettigrew had any doubt in his mind. The hand then grabbed Pettigrew by the throat and choked him to death for thinking of turning against Lord Voldemort.

Peter Pettigrew from 4766, with his magic hand, represented with a dark gray hand piece.

Pettigrew in the video game 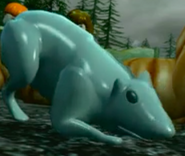 Wormtail as an Animagus. 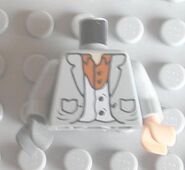