Peter Venkman is a Ghostbusters minifigure released in 2014. He is based on the Ghostbusters character played by Bill Murray of the same name. Peter Venkman also appears in LEGO Dimensions in the 71228 Ghostbusters Level Pack, 75827 Ghostbusters Firehouse Headquarters and Lego Legacy: Heroes Unboxed as an attacker hero.

Peter is portrayed as the "lazy" Ghostbuster. He doesn't usually take his work seriously, has a dry sense of humour, and flirts with women, including clients such as Dana Barrett and Ilyssa Selwyn. While Peter is a scientist, he isn't as technically experienced or academically inclined as Egon and Ray, and also tends to be more aggressive when fighting ghosts.

Peter also slacks off on experiments and usually focuses on the women or other subjects, as in the first movie he is testing sixth senses and shocks the boy in the experiment for getting the answers wrong (even though he was really getting a majority of them right) and refuses to zap the pretty blonde (even though nearly all her answers were wrong). Peter is also a very outspoken person, as he back-talked to EPA representative Walter Peck and provoked him when the discussion shifted to the storage facility. This encounter led the Containment Unit being shut down and all the ghosts escaping over New York. Peter's fast-talking, however, "bargained" the percentage from the broker they consulted in mortgaging Ray's house (in order to lease the Firehouse), as well getting their first payday of $5,000 made busting Slimer. His "gift of gab" also won over the mayor's judgment against Walter Peck.

His latest appearance appears in LEGO Legacy: Heroes Unboxed as an Attacker with the abilities Back Off, Man, You Got This!, Throw It!, and Why Worry?. 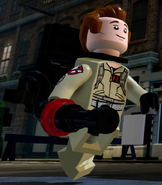 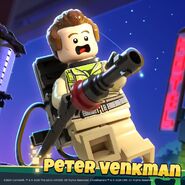 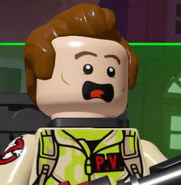 Deutsch Français Nederlands Polski Русский
Community content is available under CC-BY-SA unless otherwise noted.
... more about "Peter Venkman"
RDF feed
Appearances
21108 Ghostbusters Ecto-1
71228 Ghostbusters Level Pack
75827 Ghostbusters Firehouse Headquarters +
ArticleRating
4 +
Image
75827 alt06.jpg +
Img1
PeterIdeas.jpg +
Img2
PeterVenkman.jpg +
Img3
75827_alt06.jpg +
InfoboxTemplate
Minifigure +
ShopDescription
Peter Venkman is a scientist by trade and … Peter Venkman is a scientist by trade and a slacker by practice. But that doesn't mean he's any less dedicated to the Ghostbusters or his coworkers. Though he has a bad habit of falling in love with clients, where would the Ghostbusters be without his talents? Probably in the same spot, but don't tell Venkman that.he same spot, but don't tell Venkman that. +
Theme
Ghostbusters +
Title
Dr. Peter Venkman +
Txt1
Regular +
Txt2
Arm printing +
Txt3
Arm printing w. Slime +
Years
2014, 2016 +
Advertisement