Brickipedia
Register
Don't have an account?
Sign In
Advertisement
in: Class 4 articles, Video game only minifigures, Minifigures introduced in 2019,
and 2 more

Phantasm, also known as Andrea Beaumont, is a DC Comics Minifigure who first appeared as a DLC character in LEGO DC Super-Villains. She first appeared in the film Batman: Mask of the Phantasm.

Andrea Beamont's mother died when she was very young leaving her to be raised by her businessman father who made bad deals with the gangsters of Gotham City.

By the time Andrea was a young adult she was a bright young woman and skilled martial-artist who fell in-love with Bruce Wayne after his return to Gotham City while training to be Batman. Andrea and Bruce became engaged to be married but tragedy struck when Andrea's father had been chased out of town by the Mob and Andrea insisted on leaving to find him and start a new life while Bruce found himself unable to leave being Batman. This caused the two to break-up.

When Andrea finally found her father she discovered that the mob had killed him so she spent years training just as Bruce did to inflict her vengeance. Andrea eventually returned to Gotham using the alias of "The Phantasm" in-order to assassinate everyone responsible for her father's death which brought her into conflict with her old lover Batman who does not allow for murder. 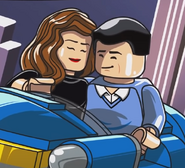 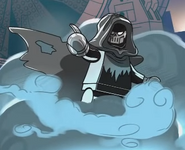