Brickipedia
Register
Don't have an account?
Sign In
Advertisement
in: Class 4 articles, Themes, Themes introduced in 2011,
and 2 more
English

Professor Archibald Hale is on the trail of Amset-Ra, a long lost Pharaoh, and his six mysterious treasures. Prof. Hale is an archaeologist, but more used to museums than working in the field. As this will be one of his rare expeditions, he hires Jake Raines - explorer, thrill seeker, and all-around daredevil - to assist with the heavier work. He discovers an Egyptian tablet, which he uses to translate a journal telling the story of Amset-Ra. It reveals his evil intentions and loyal servants, such as Mummy Warriors, flying mummies, a massive cobra, a giant scarab beetle, Anubis Guards, and other strange and terrifying creatures. The journal also contains notes about the pyramid of Amset-Ra himself, which the two explorers set out to investigate. 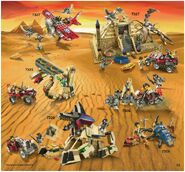 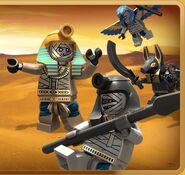