Brickipedia
Register
Don't have an account?
Sign In
Advertisement
in: Class 3 articles, Minifigures (theme), Minifigures introduced in 2010,
and 3 more
English

"That spot looks just right for a pyramid!"
―The Pharaoh

The Pharaoh is a minifigure introduced in 2010, as part of the 8684 Minifigures Series 2. He includes a Nemes headdress, a cobra scepter, and a black display stand.

The Pharaoh has a yellow flesh tone including yellow hands. He has a white linen skirt, the printing of which starts at the bottom of his torso and finishes half way down his legs. There is gold braiding along the edges of the skirt, with some blue printing too. On his chest is some decorative printing of gold jewellery that shows some kind of bird with outstretched wings, and a blue circular jewel above it. He is not smiling, and has a thin long mouth with cheekbones printed either side. Above his eyes is some linear eyeliner, and two thin black eyebrows. He comes with a Nemes headdress which is gold with blue stripes, and has a LEGO stud on the forehead, which it is possible to attach decorations to if desired. Also included is a cobra sceptre, which is entirely gold. 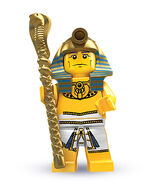 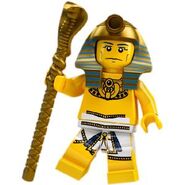 The Pharaoh standing on his base. 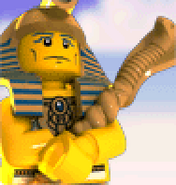 Deutsch Français
Community content is available under CC-BY-SA unless otherwise noted.
... more about "Pharaoh (Minifigures)"
RDF feed
Accessories
Scepter, Nemes headdress +
Appearances
8684 Minifigures Series 2
LEGO Battles: Ninjago +
ArticleRating
3 +
Image
Phar1.jpg +
InfoboxTemplate
Minifigure +
ShopDescription
“That spot looks just right for a pyram … “That spot looks just right for a pyramid!”<br />This Pharaoh of ancient Egypt woke up in a museum one day, and he’s been a little confused ever since. He doesn’t know how or why he’s in the modern world, but it’s definitely taking some getting used to! He’s not used to taxi cabs and supermarkets yet, and he can’t figure out where all the sphinxes and crocodiles have gone, but he’s trying to make the best of things in his strange new circumstances.First off, the place is definitely going to need some pyramids…so with the help of his friends at the museum, the Pharaoh is taking matters into his own hands and using all the bricks he can find to build his own. Now he has a little piece of home to share with everyone!ttle piece of home to share with everyone! +
Theme
Minifigures
Series 2 +
Title
Pharaoh +
Years
2010 +
Advertisement