Brickipedia
Register
Don't have an account?
Sign In
Advertisement
in: Class 2 articles, Minifigures introduced in 1998, Adventurers Minifigures,
and 2 more
English

Pharaoh Hotep,[1][2][3] also known as Pharaoh's Mummy,[4][5] Pharaoh Ramses,[6] and Eddie Elbow,[7] is a minifigure in the Adventurers Egypt theme, being first introduced in 1998. He rests in his tomb and is protected by the mummy's curse.

Hotep has black legs, printed with a green sash and grey toes. His torso is black, and printed with blue armor and a red-and-gold collar. His arms are black, and his hands red. His face is grey, and printed with a smiling, stitched-up mouth, with skull-like nostrils and dark eyes outlined in red. On his forehead, above his eyebrows, is a scar which has been sewn shut. He wears a yellow nemes with blue and gold stripes printed on it.

Hotep was buried in a temple/tomb, where he guarded the ancient Re-Gou Ruby. When Johnny Thunder entered the tomb, he was greeted with many traps set up to protect Hotep and the ruby. Baron von Barron attempted to steal the ruby, but it disappeared and was replaced by the Pharaoh Hotep, who dragged the screaming Baron into the unknown. The Baron was then trapped in the mummy's curse, which consisted of Pharaoh Hotep cracking off incredibly corny jokes until the Baron went mad.

The Pharaoh's Mummy appears as a racer in all of the variations of the video game LEGO Racers in the first and fourth circuits. His leg printing in LEGO Racers also lacks the toes on the real minifigure.

Eddie Elbow appears as part of the Skill Zone team in the video game Soccer Mania, unlockable after the player completes the fourth trial. 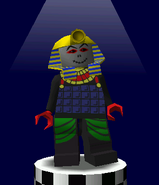