Philip Swift is a Pirates of the Caribbean minifigure that appears in the 2011 set, 4194 Whitecap Bay. He also appears in LEGO Pirates of the Caribbean: The Video Game, and can be purchased after the second level of On Stranger Tides for 100,000 studs. Philip Swift is unlocked after the final mission of On Stranger Tides in the Nintendo DS version. He has a double-sided head, the other side showing an angry expression.

Philip Swift was a young and stalwart missionary. He was one of many people who were involved in the quest for the Fountain of Youth. Not much is known about Philip's early life. At some point in his life, Philip became a missionary. He was later captured by Blackbeard and held captive aboard the Queen Anne's Revenge as a slave during the journey for the Fountain of Youth and was later freed by Jack Sparrow. At some point during the search, Philip fell deeply in love with a young mermaid named Syrena. After Syrena saves him from a falling tower, she is captured by Blackbeard. Later Philip saves Syrena from dying when he opens her cage so she can breathe. Philip was seemingly killed by Quartermaster later in order to make Syrena cry, but later it turns out it was a trick, and he returns to free, unwittingly giving Blackbeard what he wants and making her cry tears of joy. As Blackbeard ties her up and takes her tear, he tells her he had no part in this plan, but she doesn't believe him. Later, when Barbossa and the Navy attack Blackbeard and the pirates, he escapes and frees Syrena, who leaves to give the chalices to Jack, then returns and kisses Philip. 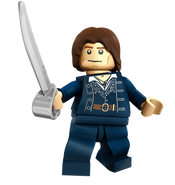 A CGI of Philip, with blue clothes and incorrect hair 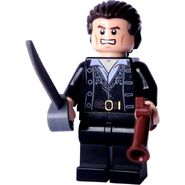 Philip Swift with his alternate face

Swift in LEGO Pirates of the Carribean: The Video Game

Swift's character token
Add a photo to this gallery
Retrieved from "https://brickipedia.fandom.com/wiki/Philip_Swift?oldid=1921313"
Community content is available under CC-BY-SA unless otherwise noted.