This article is about the animal. For the wooden toy, see Wooden Pig. For the Minecraft mob, see Pig (Minecraft).

The Pig is a System animal figure represented by a single LEGO element. It was first introduced in 2010. There are also anthropomorphic (animals with human characteristics) variants that were released in other themes. Hamm is a piggy bank from the Toy Story theme. It had two variants. Another variant is Percy Pig, from Fabuland. 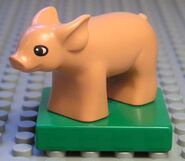 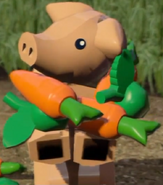