Brickipedia
Register
Don't have an account?
Sign In
Advertisement
in: Class 3 articles, The Lord of The Rings minifigures, LEGO Dimensions Minifigures,
and 2 more
English

This article is about the character from The Lord of the Rings. For the Adventurers minifigure, see Pippin Reed.

"Frodo! Merry, is Frodo Baggins!"
―Pippin in The Lord of the Rings: The Fellowship of the Ring

Pippin is a minifigure from the theme The Lord of the Rings released in 2012.

Pippin's face is double-sided, and has a new hairpiece which is currently found on all of the Hobbits. This minifigure comes with a sword that is the same as the one used for the Viking Woman and the Gladiator from the Minifigures theme, and also an olive green cape that is smaller than normal capes, to accomodate his shortened legs.

Peregrin Took was part of the Fellowship of the Ring, along with Gandalf, Boromir, Aragorn, Frodo Baggins, Gimli, Legolas, Samwise Gamgee, and Meriadoc Brandybuck. He was with the Fellowship in Moria (where he accidentally alerted the Orcs to their presence), Lothlórien, and at Amon-hen. He saw Boromir fall, and he and his fellow Hobbit Merry were taken by the Uruk-hai. However, they escaped after the Uruk-hai were attacked by Rohirrim, and fled into Fangorn Forest, where they were found by the Ent, Treebeard, who saved them from Grishnákh. They convinced the Ents to attack Isengard. After this attack, he and Merry reunited with Gandalf, Gimli, Legolas and Aragorn, and went back to Edoras. Pippin later picked up the Palantír of Orthanc, and then looking into the stone, he had an encounter with Sauron. Gandalf brought him to the City of Minas Tirith, where Denethor made him one of the Guards of the Citadel. Later he saved Faramir, Captain of Rangers, from Denethor. Pippin was part of the Army of the West that assaulted the Black Gates. 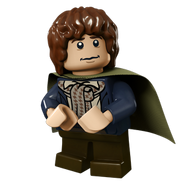 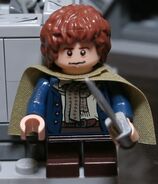 Pippin at the Toy Fair

Back printing and alternate expression 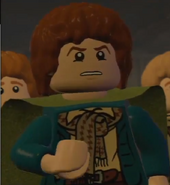 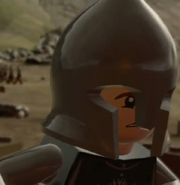 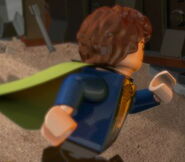 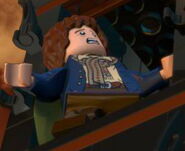 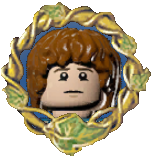 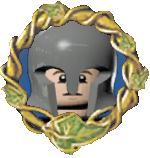 Guard of the citadel

Deutsch Français Nederlands
Community content is available under CC-BY-SA unless otherwise noted.
... more about "Pippin"
RDF feed
Accessories
Cape
Barrow-blade
Troll's bane
Helmet +
Appearances
9473 The Mines of Moria +
ArticleRating
3 +
Image
lor012.jpg +
Img1
Pippinbucket.png +
Img2
Pippin_Doctor.png +
Img3
Gondorpippin.png +
InfoboxTemplate
Minifigure +
ShopDescription
Pippin Peregrin Took, or Pippin, is … Pippin</br></br>Peregrin Took, or Pippin, is the youngest of the Hobbits. He and Merry are best friends. Pippin is usually a very happy Halfling who is always ready to jump to his friends' defense and save the day on this mission/quest...thing. Usually, without thinking things through first. Sometimes that can backfire and cause more trouble for the Fellowship, but his heart is in the right place. Mealtimes are his absolute favorite times of the day. And since Hobbits eat breakfast, second breakfast, elevensies, luncheons, afternoon tea, dinner, supper, and sometimes midnight bacon and tomatoes, this could explain why he is always happy. His curiosity and free spirit will be tested beyond his wildest imagination on this journey. His trials will change him forever.urney. His trials will change him forever. +
Theme
The Lord of the Rings +
Title
Pippin +
Txt1
Regular +
Txt2
Paramedic +
Txt3
Guard of the citadel +
Years
2012, 2015 +
Advertisement