This article is about the Adventurers minifigure. For The Lord of the Rings character, see Pippin.

Pippin Reed (or Pippin Read), formerly known by various other names including Gail Storm and Linda Lovely, is a minifigure in the Adventurers theme, introduced in 1998.

Pippin Reed's original Egypt minifigure wears a white pith helmet; a brick yellow button-down shirt with pockets, a red scarf, and a blue camera strapped around her collar; and bright red pants. Her face is printed with brown hair, black eyelashes, and red lips. In the Jungle subtheme, her torso was changed to a dark green jacket worn over a white button-down shirt with a necklace and silver camera. Her appearance in Dino Island remained largely unchanged, although she sometimes wears an earth orange aviator's helmet with black goggles; she also wears this helmet in LEGO Island 2 and Soccer Mania.

In Studios, Pippin Reed's design is derived from her Egypt minifigure with some alterations. In 1354 Dino Head Attack, she wears an earth orange slouch hat and black pants. In Jurassic Park III, she wears a white U.S. Cap and an earth orange backpack.

In Orient Expedition, Pippin Reed's design was largely overhauled while retaining aspects of her previous appearance; most notably, she received a new face print with a significantly altered hairstyle and lip shape, while her eyelashes were removed. In India, Pippin wears brick yellow pants and a dark green shirt with a red scarf, a black camera strapped around her neck, and various tools on her belt. In Mt. Everest, Pippin wears an earth orange sherpa hat; an earth orange coat with white fleece lining, a much longer red scarf, and a white case strapped around her torso; black gloves; and brick yellow pants. In China, Pippin returns to her classic Egypt outfit, albeit with an earth orange aviator's helmet similar to her appearance in Dino Island.

As with all other Adventurers Egypt characters, Pippin Reed has used a variety of names in different regions, and has even changed names multiple times over the years.

In North America, the character was originally named Miss Gail Storm in LEGO Mania Magazine January/February 1998.[1] This name is also used in 1998-2000 Shop At Home catalogs,[2][3] the LEGOLAND California Resort Adventurers' Club,[4] and later issues of LEGO Mania Magazine for subsequent subthemes.[5][6] In LEGO Racers, her name is Gail Storm in every language except for Spanish, which gives her the name Tormentosa (Stormy).

In the United Kingdom, the character was first named Miss Pippin Reed in the 1998 catalog.[7] However, the spelling of her surname varied in different sources. In Bricks 'n' Pieces March/April 1998, her name was spelled Miss Pippin Reid.[8] The more common spelling at the time, however, was Miss Pippin Read; this is used in many sources, including LEGO Adventures! Magazine Issue 6,[9] The Lost Temple - An Interactive Puzzle Book,[10] all languages of 5774 LEGO Island 2: The Brickster's Revenge, Pepper's Skateboard Challenge, and LEGO Racers 2 (specifically, the Game Boy Advance version). In the Russian Homemade magazine, her name is translated as Пипин Рид (Pipin Rid).[11]

In Germany, the character was originally named Linda Lovely in LEGO World Club Magazine March/April 1998[12] as well as in the audio drama Die Jagd nach dem Pharaonenschatz.[13] In the Time Cruisers comic, she is referred to as Miss Lovely.

In 2002, Pippin Reed emerged as the character's most commonly-used name for the first time since its debut in the 1998 UK catalog. It was used in 5784 Soccer Mania, The Restless Mummy,[14] and the Minifig Handbook, and then was cemented as her definitive name across all Orient Expedition media. Since then, her name has consistently been Pippin Reed, including in the Lost Kingdom Adventure,[15] The Secret of Scorpion Palace,[16] Journey to the Lost Temple,[17] The LEGO Book, Standing Small: A Celebration of 30 Years of the LEGO Minifigure, and LEGO Minifigure Year by Year: A Visual History.

Pippin Reed is the female companion of Johnny Thunder and Dr. Kilroy, and a budding journalist for "World Magazine", recording all of the adventures that they go on. She has an unknown history with Alexia Sinister, having encountered the villain prior to their Dino Island adventure. According to The Lost Treasure of Ancient Greece, Pippin is gifted with a photographic-memory. Her nationality is American, according to LEGO.[source?]

At the end of Die Jagd Nach Dem Pharaonenschatz, Linda Lovely becomes engaged to Joe Freemann. However, despite their close friendship, Pippin Reed is otherwise rarely shown to be romantically involved with Johnny Thunder, with their relationship only portrayed as platonic in most media. A LEGOLAND Windsor Resort Facebook post even identifies Johnny Thunder's wife as another character named Ameila.

In LEGO Mania Magazine January/February 1998, Gail Storm was characterized as being unafraid of snakes and scorpions. However, this character trait is repeatedly contradicted by other media. In Die Jagd Nach Dem Pharaonenschatz, Linda Lovely is frightened by Professor Articus's pet cobra Kleopatra; in the German Orient Expedition audio book, Pippin Reed is paralyzed with fear by Babloo's curious snake Juti; and in Journey to the Lost Temple, Pippin Reed is terrified by Slither the talking snake.

Gail Storm appears in Circuit 7 as one of the other four CPU racers that the player has to compete with, whilst also beating Rocket Racer. After the player beats Johnny Thunder and wins Circuit 4, Gail Storm's minifigure parts are unlocked for the character builder.

Pippin Read also makes an appearance in the sequel, LEGO Racers 2. She appears with Johnny Thunder, hosting the two bonus missions for the player to complete on the Dino Island world. Aside from this, Pippin also appears as one of the CPU racers for the player to beat on the Dino Island, Mars and Arctic worlds, in the four races that lead up to the boss races on each world. In Free Play mode, Pippin also acts as a CPU racer on the Sandy Bay circuits.

Miss Pippin Read makes an appearance in 5774 LEGO Island 2: The Brickster's Revenge where she and Johnny meet Pepper Roni who was on a quest to find the Constructopedia pages. They would help him in exchange for helping them get their gems back from snakes. Here, Pippin also showed interest in making markers, considering the task to be fun.

In the Game Boy Color version, Pippin Read helps free Pepper Roni after Señor Palomar has him arrested by the Imperial Guards and Imperial Soldiers. Pippin then directs Pepper to go into the jungle, giving him the key to the gate.

Pippin Read's only appearance in the Game Boy Advance version is as an unlockable trading card.

In the online game Pepper's Skateboard Challenge, Miss Pippin Read is the best pilot on LEGO Island. She flies Pepper Roni and the Brickster to Adventure Island for a skateboarding competition. Pippin Read herself is an unlockable character. 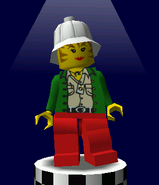 Pippin Reed in The Secret of Scorpion Palace

Pippin Reed in Journey to the Lost Temple


Miss Storm helps Dr. Lightning study creepy curses, cryptic hieroglyphics, and mysterious mummies. She is also the group's camera person. Miss Storm is not afraid of snakes and scorpions. +, Miss Pippin Reid
Miss Pippin works with the Professor studying ancient curses and hieroglyphic codes. She's also an experienced camera person. +, Johnny Thunder and Pippin Read
Travelling the world in search of lost treasures! +, Gail Storm
Gail records all of the Adventurers' adventures and has tangled with Alexia Sinister before. +, One of the great Adventurers and photographic correspondent for World Magazine, Miss Pippin Read is ready to skate. +, Miss Pippin Reed
Pippin is a gl … Miss Pippin Reed<br/>Pippin is a globe-trotting reporter for the international publication, "World Magazine." Headstrong and sometimes argumentative (she doesn't like men telling her what to do just because she is female), she sometimes puts herself in danger...but she has plenty of courage and smarts to get herself out of danger, too! smarts to get herself out of danger, too! +  and PIPPIN REED