This article is about the Series 8 minifigure. For the 2015 Pirates minifigure, see Captain Redbeard.

"Yarr! Don’t ye know who I be? And if not, do ye have any suggestions?"
―Pirate Captain

The Pirate Captain is a Minifigures minifigure released in September 2012 as part of the 8833 Minifigures Series 8.

The Pirate Captain wears a red longcoat and a bicorne hat with a gold skull and crossbones, as well as a few small gold dots, which decorate the hat. There is also a white plume/feather that attaches to a small hole fit for it. His face is printed with black bushy sideburns, and big, black moustache. He also has a dark red eyepatch, and a bloodshot eye on the other side. His torso print is a red jacket, with a white ruffled shirt underneath and several buttons, with a with a brown bandoleer belt printed over the jacket. He has a gold hook hand, and a gold cutlass piece, which is exclusive to this figure. He has a brown peg-leg on the right side, black hips and a single black, unprinted leg on the left.

In The LEGO Movie, the Pirate Captain is seen in Wyldstyle's backstory about the Master Builders. The Pirate Captain's parts made a cameo in MetalBeard's first storming of the Octan Tower as MetalBeard wore them. He also can be seen in the Think Tank of Lord Business. 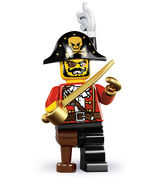 Pirate Captain as seen in The LEGO Movie.
Add a photo to this gallery