Pirate Lady has a black torso decorated with a dark green bodice over a white sleeveless chemise, showing off her bright yellow arms, as well as bright blue pants. Her dark brown hair is tied back into a ponytail. She has a smirking facial expression (modified from Agent Trace) and an eyepatch covering her right eye.

Belle Brickbeard is nearly identical to Pirate Lady's physical minifigure, except with a different face print that has a cheerier smile and no eyepatch.[3]

Pirate Lady is part of the Captain Brickbeard's crew, helping to defend their Shipwreck Hideout from the Royal Navy. As Belle Brickbeard, she has an unknown relationship with Captain Brickbeard and may be his wife, sister, or daughter.

In LEGO Battles, Lady Pirate is the female Hero of the Pirates army. Lady Pirate has 4 strength, 1000 life, 500 bricks, and 2 speed, and her Magic Spells are Area Speed Boost, Area Armor Boost, Monkey Swarm, and Crab Swarm. Since she can only be unlocked by completing the Pirates' Story, Lady Pirate is only playable in Free Play mode.

In the Pirates Final cutscene, Lady Pirate approaches Captain Brickbeard with a new treasure map, snapping him out of his boredom and getting him excited about a new treasure hunt.

In The LEGO Movie, the Pirate Lady is among the members of MetalBeard's crew as seen in his flashback.

In The Emmet Awards Show!, the Pirate Lady is prominently featured as one of the audience members, standing next to Johnny Thunder. In the "Dedicated to Ma and Pa Cop Award" category, the Pirate Lady is seen in a photo with MetalBeard and another pirate while the announcer discusses parents, guardians, close friends, and family members. 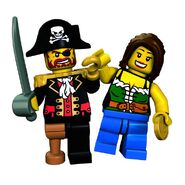 The Pirate Lady in MetalBeard's Crew.