Pirate Princess Argenta reuses the Fortune Teller's hair piece, but with a bright red bandana and the gold beads left black. She wears a bright red bodice (similar in detail to the Lady Pirate's torso, albeit recolored) over a white sleeved chemise, along with black pants. She has an eyepatch over her left eye, and a double-sided head with smirking and grimacing facial expressions.

In LEGO Quest & Collect, Blade Dancer has a slightly different design compared to her physical minifigure. The beads on her hair piece are colored red, and her face print is altered to remove the eyepatch.

Pirate Princess Argenta is the daughter of Captain Redbeard and an expert swordswoman,[5] and the twin sister of Ms. Dagger.[6] Before becoming a pirate, she was warm and soft-hearted; nowadays, she hides these traits beneath an edgy and pointed persona. She seeks to capture Admiral Nonsuch to help her father.[5] Argenta is an expert swordfighter just like her mother, although she is implied to have lost her eye in a sword duel.[2] As a pirate captain, she proves herself by fearlessly pursuing dangerously foolish jobs, although her crew does not share her enthusiasm.[1]

In LEGO Quest & Collect, Blade Dancer is a physical attacker with the skills "An Old Companion", "Formidable Defense", and "Quicksword".

In LEGO Legacy: Heroes Unboxed, Pirate Princess Argenta is an Explorer attacker unit with the abilities "Rallying Strike", "Take No Prisoners", "Meet Your Matchlock", and "Loyalty to the Captain". In Glyph Hunt, she canonically joins the Explorers' team by the time they confront Willa the Witch and rescue Majisto. After they encounter Rorrim, Argenta insists that the Explorers must collect the Glyphs of the Elements to stop his evil plot, prompting the Explorers and Builders to go on separate paths. Paramedic Poppy and the Builders gather the people of Piptown in the Piptown United campaign and introduce themselves as friends of Argenta, only to learn that Argenta had previously cheated Darwin the Pirate out of gold and left a hole in his boat. 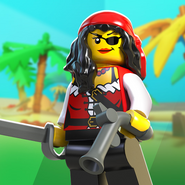 Argenta and other Pirate-themed heroes in LEGO Legacy

Retrieved from "https://brickipedia.fandom.com/wiki/Pirate_Princess_Argenta?oldid=2001462"
Community content is available under CC-BY-SA unless otherwise noted.
... more about "Pirate Princess Argenta"
RDF feed
Accessories
Sword
Pirate Telescope +
Appearances
70411 Treasure Island +
Image
70411 Pirate (Female).jpg +
InfoboxTemplate
Minifigure +
ShopDescription
The Pirate Princess loves adventure. She is an expert swordfighter who never steps away from a duel….which explains the eye patch. +, NAME: Blade Dancer
THEME: PI … NAME: Blade Dancer<br/>THEME: PIRATES<br/>The daughter of Redbeard and an expert swordswoman, Blade Dancer wants to help her father by capturing the Admiral. Though appearing as edgy and pointed as the cutlass she uses, inside she is still the warm and soft-hearted person she was before becoming a pirate.d person she was before becoming a pirate. +  and An opportunistic attacker who sends debuff … An opportunistic attacker who sends debuffed enemies to the briny depths. Always looking to prove herself, Argenta never backs down from a fight... which probably explains the eyepatch.Trivia<br/>As it turns out, high-seas piracy can be a bit of an old boys' club. Luckily, Pirate Princess Argenta is right there in the thick of it, using her rapier to carve out a seat at the table and a lion's share of the loot. A completely fearless captain, there's no job too dangerous, too foolish, or too foolishly dangerous for Argenta to take on... a fact that her crew is somewhat less than enthusiastic about.Yaaaaar, Queen!<br/>Argenta appears only in the 2015 "Treasure Island" set, where she is referred to as "Pirate Queen."Doppelgangarrrrrrs!<br/>Argenta's face and torso are similar to the female pirate that came with the "Shipwreck Hideout."Chapeau Piracy<br/>Argenta's bandana and hair are recolored versions of pieces originally created for the LEGO Fortune Teller.nally created for the LEGO Fortune Teller. +
Theme
Pirates +
Title
Pirate Princess Argenta +
Variations
Blade Dancer +
Years
2015 +