Plastic Man also known as Patrick O'Brien, is a DC Super Heroes minifigure who appears in LEGO Batman 3: Beyond Gotham. He is a bonus minifigure for players pre-ordering the game from GameStop. He looks identical to how he does in the game, with the same hairpiece as Superman.

Patrick "Eel" O'Brien was orphaned at the age of 10 and forced into a life of crime. During a heist with his gang at Crawford Chemical works, they were caught by a watchman, surprising them. When they attempted to escape, O'Brien was shot to the shoulder and fell into a chemical drum. His gang had ditched him, so he fled to a mountain where he met a monk, who drove away the policemen that followed. O'Brien later had a change of heart and also discovered that the chemicals gave him shape-shifting, elasticity and pliability, along with various other properties of rubber and plastic. He decided to use these new-found abilities as the crime-fighter, Plastic Man. 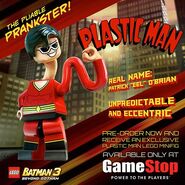 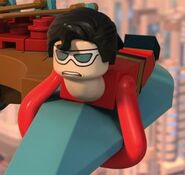