Brickipedia
Register
Don't have an account?
Sign In
Advertisement
in: Television episode only minifigures, Class 4 articles, Legends of Chima minifigures,
and 2 more
English

Plovar is a small bird that appears in the Legends of Chima: The Animated Series.

When Cragger is speaking to all of the crocodiles, wolves, and ravens, preparing them for battle, Plovar flies in between Cragger's teeth, picking debris from them. Cragger protests, and Plovar replies that he made an appointment which must be fulfilled. When Cragger asks to reschedule, Plovar mumbles "Some people do not understand the art of dental hygiene".

In The Legend Thief he comes to give Crooler a teeth cleaning appointment only to be captured by the spiders. They take him to Spinlyn so he can clean and fix her tooth. She says if he doesn't they'll eat him.

In This May Sting a Bit, he tricks Spinlyn into having a mud bath causing her to be stuck along with her tribe.

In Cool and Collected he talks to Cragger and helps him when he melts ice he stands on. He mentions that his beak can lift 50 times his weight. When the Mammoths prepare to attack, Crooler hides herself behind Plovar. He is mistaken as Flinx by Mottrot and taken to Sir Fangar.

In The Snowball Effect, Sir Fangar claims that Plovar is no trophy and asks Stealthor to put him with the booby prizes(animals like fish and butterflies that got frozen by the hunters). Stealthor places Plovar upside down.

Also, in The Legends of Chima 4-D X-perience, he appears flying around in his vehicle that resembles him with G'Loona, Skinnet, Furty and Wonald. 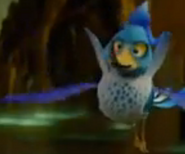 Plovar in the animated series.

Plovar in his Vehicle along with others in The Legends of Chima 4-D X-perience.