In the first video game, the Ivy Goons are plant zombie-like in appearance, with sharp teeth and red eyes. They have a green torso and head, and run and act like any other goon in the game. Bald-headed Ivy Goons look somewhat like Killer Croc.

Poison Ivy Goons are altered from the first to second games, like practically all the other characters. They still have their red eyes and sharp teeth, but their red eyes are surrounded by black shading. They seem to have primitive clothing, wearing yellow and jagged pants. Leaves surround a buff torso, and they have three leaves on the top of their head.

In the first videogame, the Poison Ivy goons act like any other goon, but, when unlocked, they can destroy poisonous plants and are not harmed from toxic waste. They shoot with guns if far away enough, and use basic punching and kicking as their weapon. They are found in the level "A Poisonous Appointment."

The Poison Ivy Goons are common enemies in LEGO Batman 2: DC Super Heroes, especially around Poison Ivy and the other villains she is working with. The minikit needed to unlock them for purchase can be found in the level "The Batcave". They cost 3,000 studs.

They also appear on consoles as extra toggle and as basic enemies found around the city, but most commonly found in the Botanic Gardens during the fight against Poison Ivy and the Park's Maze. 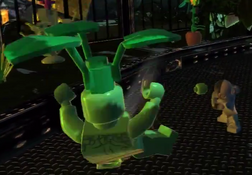 An Ivy Goon in midair after being punched by Cyborg