The Polar Bear is a Bear figurine that mostly appears in the Arctic theme.

The original figure's head can be moved vertically in the same way that the horse figure's head can be moved. The Polar Bear's mouth is open as if ready to roar and is stepping forward, yet it lacks a detailed face. It is entirely white coloured. The Polar Bear is sized and shaped similar to that of a Horse, Hippogriff, and a Cow. Its part number is 76147.

The ’10s edition features a more detailed face, having black eyes and a black nose. Its pose is similar to the ’00s version, but its hind legs are adjustable.

The Friends variation is a single piece with no articulation. It appears only in 41131 Friends Advent Calendar and 10736 Anna and Elsa's Frozen Playground

Unlike the other variations, the Minecraft variations are brick-built figures, one which is an adult and the other which is a cub. So far they appear exclusively in 21142 The Polar Igloo. 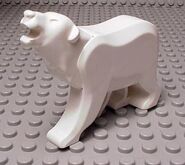 Old version of the polar bear 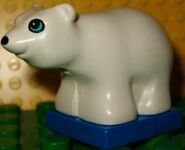 Three bears running from the Berg out of his cave