Brickipedia
Register
Don't have an account?
Sign In
Advertisement
in: Class 4 articles, Minifigures (theme), Minifigures introduced in 2013,
and 3 more
English

Policeman is a Minifigures Series 9 minifigure released in January 2013.[1] He will also appear in LEGO Minifigures Online.

The Policeman wears a dark blue police hat and he has a good-natured smile and black eyebrows. He has a dark blue torso which has pockets and a black clip on tie. He has dark blue arms, yellow hands, and dark blue legs.

In The LEGO Movie, he is among the Master Builders to meet in Cloud Cuckoo Land. 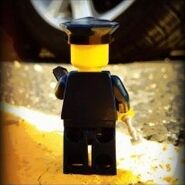 The Policeman as seen in The LEGO Movie.

Deutsch Français
Community content is available under CC-BY-SA unless otherwise noted.
... more about "Policeman (Minifigures)"
RDF feed
Accessories
Handcuffs Police ID +
Appearances
71000 Minifigures Series 9 +
ArticleRating
4 +
Image
PoliceMan.jpg +
InfoboxTemplate
Minifigure +
ShopDescription
“Gotcha!”
There’s no one more … “Gotcha!”<br />There’s no one more dedicated to catching bad guys than the brave Policeman. He may work out of the big city, but he’ll tirelessly pursue crooks no matter where they try to hide, risking life and limb every day while doing his duty to protect the public and uphold the law.Robbers may flee to the distant desert or the dense forest, but they’ll always hear the footsteps of the Policeman following behind them. And just when they think they’ve gotten away with the loot, there he’ll be with his shiny badge and handcuffs to arrest them and haul them off to jail. Break the law and beware: the Policeman always gets his Minifigure!"the Policeman always gets his Minifigure!" +
Theme
Minifigures
Series 9 +
Title
Policeman +
Years
2013 +
Advertisement