Polka-Dot Man also known as Mr. Polka-Dot is a Super Heroes minifigure who appears in LEGO Batman 3: Beyond Gotham.

Abner Krill AKA Polka-Dot Man AKA Mr. Polka-Dot is an minor enemy of Batman. Krill was a minor criminal in Gotham City who believed that he could make it big if he donned a super-villain persona.

As Polka-Dot Man, Abner relied on weaponized polka-dots concealed in his poka-dot spandex suit to carry out spot themed crimes. It is unknown whether Abner made his polka-dot weapons, stole it or purchased it but regardless it was expensive to maintain causing the low-level villain to rely less and less on it in favour for weapons like baseball-bats.

Abner Krill has the unusual ability to pull off the circular spots on his colorful, hi-tech costume and turn each one into a different gadget for committing crimes or escaping justice. His dangerous dots can be thrown through the air as buzz-saws, expanded into flying getaway saucers, hurled at enemies to knock them out, or have dozens of other uses. He sure looks goofy doing it, though! Bat-Fact: The first time I met him, he called himself Mister Polka-Dot. The new name isn’t really an upgrade. 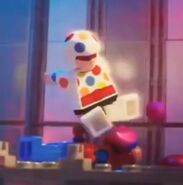