Brickipedia
Register
Don't have an account?
Sign In
Advertisement
in: Class 3 articles, Minifigures (theme), Minifigures introduced in 2010,
and 2 more
English

"This one goes out to all my fans!"
―Pop Star

The Pop Star, named Gwen Tweenbangle,[1] is a minifigure that was released in 2010 as part of 8684 Minifigures Series 2. She comes with a microphone and a black stand.

The popstar has long light brown hair, she has a singing face in yellow, with pink eyeshadow, pink lipstick and a beauty spot. The popstar has a light pink torso which has sliver spots on it with part of her midriff showing, she wears a sliver necklace decorated with hearts, she has plain yellow hands and arms. She wears dark pink pants with silver studs decorated on it. She comes with a microphone as her accessory. 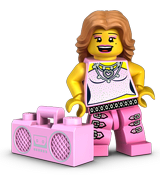 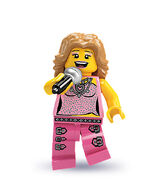 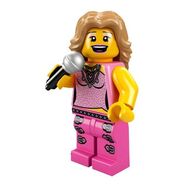 The Pop Star on her base.

Deutsch Français
Community content is available under CC-BY-SA unless otherwise noted.
... more about "Pop Star"
RDF feed
Accessories
Microphone +
Appearances
8684 Minifigures Series 2 +
ArticleRating
3 +
Image
PS1.jpg +
InfoboxTemplate
Minifigure +
ShopDescription
“This one goes out to all my fans!”< … “This one goes out to all my fans!”<br />The Pop Star is at the top of the charts. Her last three albums went platinum and her videos are in non-stop rotation on all the music channels. She travels the world in limos and private jets and has more fans than she knows what to do with.No matter how famous she gets, though, the Pop Star is still a normal girl who dances around her bedroom singing to the mirror, likes to hang out with her friends at the movies, and loves a good burger and fries!movies, and loves a good burger and fries! +
Theme
Minifigures
Series 2 +
Title
Pop Star +
Years
2010 +
Advertisement