Power Man is a Marvel Super Heroes minifigure that appeared in 2014.

Power Man has a bald reddish brown head printed with black sunglasses with a silver brim, cheekbones, and a smile. He has a orange yellow torso printed with black parts on his belly and collar, and the suit's cut on his body. The back printing features a mostly black torso with a orange yellow spot on the shoulder blades and the suit's cut on his back. He has plain black legs.

After being wrongfully imprisoned, Carl Lucas was the subject of a failed experiment, transforming him into the super hero, Luke Cage. Following his escape from prison, Cage uses his superhuman strength and unbreakable skin to fight for the common man. Over the years, Cage has been a member of many super hero teams, but is now often seen fighting alongside Iron Fist, Daredevil and Jessica Jones. 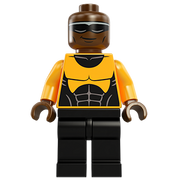 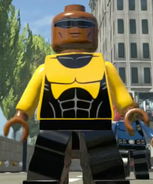