Power Miners is a theme released by LEGO in January of 2009, and was discontinued in 2010. It is similar to the Rock Raiders theme, and may be considered as that theme's spiritual successor. Short biographies for the crew, as well as the complete assortment of monsters—including the Crystal King—could be found on the Power Miners sub-site during the theme's run. These pages have since been discontinued along with the theme.

Between 2009 and 2010, two generations of the theme were released. The first is the 2009 generation, in which the Power Miners are deep in the crust of the Earth. In this generation, they fight the Rock Monsters, including the deadly Throwing Monsters and the powerful Crystal King. The Miners use plastic molds of dynamite, rather than a 1-by-2 plate with a dynamite printing as seen in Rock Raiders and other preceding sets. The 2010 generation charts that the Power Miners have drilled into the volcanic recesses of the Earth's core. The team faces the Lava Monsters, including Eruptorr, the king of the Lava Monsters. Instead of fighting the Lava Monsters with Dynamite—in 75% of the sets, the miners do not—they use water cannons.

The theme is set in underground caverns—like the Rock Raiders theme—and the basic story involves a group of mining specialists called Power Miners. The team is sent underground to investigate what is causing a series of severe "earthquakes" responsible for the devastation of several cities on Earth's surface. While there, the Power Miners discover the Energy Crystals and the Rock Monsters. The team decide to attempt to collect and mine the crystals in order to stop the monsters from consuming them and causing more of the "rumblings" on the surface. The Power Miners are dressed in blue and gray clothing, and their vehicles are green and orange in a fashion similar to that of real-world mining equipment; this is a fundamental difference between this theme and Rock Raiders, which is more futuristic.

All of the theme's sets include at least one of the Power Miners and one of their vehicles, as well as one or more Rock Monsters, except 8962 Crystal King, which only contains the Crystal King himself and two of the miners with a small, hand-held drilling unit. As an exception, the two promotional sets, 8907 Rock Hacker and 8908 Monster Launcher, do not include either a miner—in the case of 8908—or a Rock Monster (in the case of 8907).

Power Miners has introduced many new parts. Some of these are drills, special spiked wheels, Lava and Rock Monsters, and Dynamite that is three-dimensional as opposed to the more traditional 2-by-1 plate. This piece has also been used in Space Police III, Toy Story, and Agents 2.0.

The theme reprises several elements that were already present in the Rock Raiders theme ten years earlier, such as the occurrence of Rock Monsters and Energy Crystals. However, unlike in its predecessor, the Rock Monsters play a bigger role and are included in nearly every set. Additionally, each character—with the inclusion of the Rock Monsters—is named. Power Miners also implemented several features that only appeared in the planning stage of Rock Raiders, such as the concept of a mobile base and a common uniform for the miner minifigures.

2009
The eponymous Power Miners are a group of mining specialists who have a large variety of mining vehicles and equipment at their disposal, such as piloted bipedal robots and tracked vehicles. Most of the vehicles are equipped with drills and include elaborate gear mechanisms. The Power Miners have a large base—8709 Underground Mining Station—and also a mobile drilling rig—8964 Titanium Command Rig—which acts as a portable secondary base.

The four main characters are: Doc, the leader of the team; Rex, the engineer; Duke, the mining veteran; and Brains, the top scientist.

In order to investigate the cause of several mysterious rumblings on the surface, the Power Miners were sent underground by the government, where they encountered the Rock Monsters and enigmatic energy crystals. The profile for Doc on the Power Miners' website in 2009 mentioned a "Portal", suggesting that there is a large hole leading into the underground.

2010
In the 2010 theme, the miners travel farther underground. They don new silver clothing and armour to protect themselves from the heat. They encounter Lava Monsters, and are equipped with mining vehicles with water cannons to fight the Lava Monsters. One of their lower bases is Lavatraz, for the detainment and containment of errant Lava Monsters.

Rock Monsters are the antagonists of the Power Miners and are included in almost every set. There are five different kinds of Rock Monsters—red, green, blue, yellow, and orange—that have been named. The first wave of sets contained only small versions of the monsters - Boulderaxes are strong, slow, and dumb; Firoxes are sneaky and love to mess with the Power Miners' vehicles; Glaciators are mean and very ill-tempered; Sulfurixes can melt through solid rock to make their own tunnels; and Meltroxes are very temperamental and destructive.

The Rock Monsters lack any vehicles or high technology. Their only equipment comprises of small catapults included in 8961 Crystal Sweeper and the Monster Launcher.

Rather than being a serious threat, the Rock Monsters are portrayed as childish hoodlums in the videos on the LEGO website and they have silly personalities and a gluttonous nature.

The larger Rock Monsters are more devious. Instead of being mischievous tricksters, they are sadists and bullies, throwing rocks and smaller Rock Monsters at the Power Miners and their equipment.

In 2010, a new type of monster was introduced - the Lava Monster. They live deeper underground than the Rock Monsters and they must be fought with water instead of fire, due to their heat-based nature.

These Lava Monsters also have larger versions, like the Rock Monsters.

New Parts (Not including Minifigures and Accessories)

These parts are not actual parts; rather, they are Sticker Sheets that are sold in most LEGO System sets. They include:

When Power Miners was first released, a Power Miners movie was also released to promote the theme. These movies are no longer available, as the site has since moved off-line.

A prototype of the "midi" Rock Monsters. 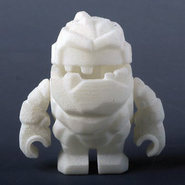 The final mould for the mini Rock Monsters. 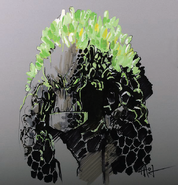 The original sketch for the Rock Monsters.

Another old sketch for the Rock Monsters. 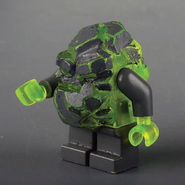 The original prototype for the mini Rock Monsters.

A prototype for the Crystal King's rock pieces.

Another prototype for the Crystal King's rock pieces.