Brickipedia
Register
Don't have an account?
Sign In
Advertisement
in: Class 2 articles, Minifigures introduced in 2014, The LEGO Movie Minifigures,
and 2 more
English

President Business is the main antagonist of Warner Animation Group’s 1st full-length animated feature film The LEGO Movie, and a minor character in its 2019 sequel The LEGO Movie 2: The Second Part.

He is voiced by Will Ferrell in the film, Keith Ferguson in the video game adaption, and Nolan North in LEGO Dimensions. He is the idol and number-one hero of Emmet, until he learns Business plans to freeze the world with the Kragle. In the final battle, Emmett convinces Business to reform his ways.

Lord Business normally wears a gray business suit. He has a yellow head with a large brown unibrow and an evil smirk. One of his personas wears square brown hairpiece, and his other wears an elaborate headdress decorated with red coffee cups, a chest plate with a metal business tie as well as a long cape that also resembles a business tie and exaggeratedly large boots with sections that light up. The boots can also change their height to however Business wants.

His alternate face resembles his visor down.

Lord Business is the alter ego of President Business, an uptight company president who wants to organize everything around him. As Lord Business, he commands a robot militia with plans to take over the world by gluing it together with a substance called Kragle which is actually a tube of Krazy Glue.[1]

Believing imagination to be weird and messy in a world of order, he considers anyone with creativity in mind to be a threat - including Emmet who, despite not having a creative bone in his body, possesses the "cap" to seal his defeat.

To this end, he attempts to capture Vitruvius, but the old man escapes, albeit blinded. Eight and one-half years later, Lord Business means to capture every Master Builder, and to do this, Lord Business hired Bad Cop/Good Cop to lead the Super Secret Police to hunt them down.

"Release Every Micro Manager we have!"
―Lord Business

In the final battle, Emmet convinces Lord Business that creativity is not messy or weird, and that it is okay for the people to build brand-new ideas from all the things Business himself had made, which makes him special, too, just like everyone is special. Moved by Emmet's speech and touched by being considered special, Business applies the Piece of Resistance on the Kragle, which soon causes the Kragle to explode, deactivating all of his robot minions, and unfreezing his victims (though the real "victims" were saved when the Man Upstairs cleaned the glue off them). As a result, Lord Business got out of the exploded rooftops of his tower along with Emmet and came back using a watering can saying "Oops, I've got the antidote for the Kragle, how did that happen?".

In real life, Finn based Lord Business off his father (who was referred to as "The Man Upstairs").

In the second LEGO Movie, he leaves Bricksburg when the DUPLO Invaders arrive. He leaves to go golfing, and returns at the end of the movie. While wearing Sweet Mayhem's helmet, Benny flies by President Business, setting him on fire. He then runs into a fireworks shop, accidentally igniting a bunch of fireworks in the shop.

Lord Business in a movie poster

Lord Business with his headdress

President Business in a cardboard cutout promoting The LEGO Movie 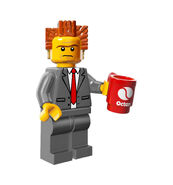 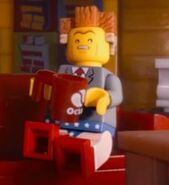 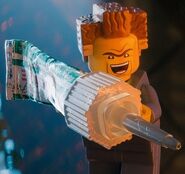 The physical minifigure, with the visor down 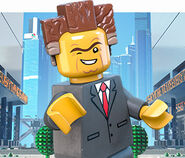 President Business as he will appear in The LEGO Movie 2

In The LEGO Movie 2 Videogame. 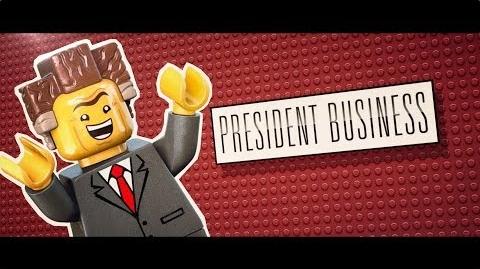 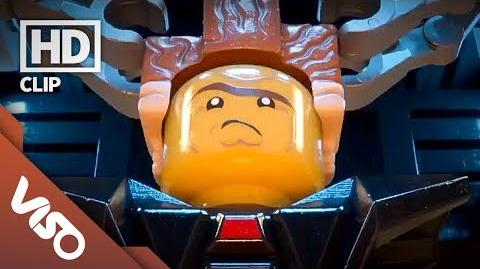