Prince Charming is a DUPLO Figure released in the Disney Princess theme in 2012.

The Prince has unprinted, red legs. His light yellow torso has golden epaulets and ribbons printed on it. He has long light yellow sleeves, and light nougat hands. His head is light nougat as well, and features large brown eyes, and a smiling expression. He has black hair.

One day, Prince Charming wished to get married. So he held a grand ball, and invited everyone to it. He was utterly charmed by a mysterious girl who ran off at the stroke of midnight, leaving behind only a slipper. The Prince traveled through the land, until he found the girl who's foot fit the slipper - Cinderella. They got married, and lived happily ever after in a castle. 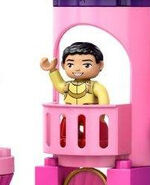 The Prince in his castle 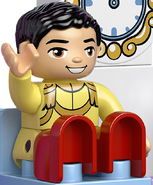