Brickipedia
Register
Don't have an account?
Sign In
Advertisement
in: Class 4 articles, Knights' Kingdom Minifigures, Minifigures introduced in 2000,
and 3 more

Princess Storm is the daughter of King Leo and Queen Leonora, and the sister of Edward. One time, she helped build a catapult with Richard the Strong to help him get inside the throne room after Cedric the Bull locked them outside in the courtyard. She is strong enough to defeat Cedric in a swordfight.[1] She helped defended her parent's castle against Cedric the Bull and Gilbert the Bad. She appears in the video game LEGO Island 2 on Castle Island, as well as in Medieval Mischief and Mayhem where it is revealed she and John of Mayne have feelings for each other. In LEGO Soccer Mania she is a member of the Leo's Lions team and a playable character.

She appears in LEGO Legacy: Heroes Unboxed as an Attacker-tank hybrid with the abilities Vorpal Strike, Cata-Brick!, Stalwart Defense and One Tough Lady. She is notable for her ability to damage all of the opponents with extremely high damage. 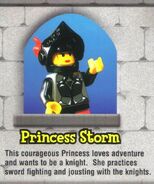 ArticleRating
4 +
Image
Knights' Kingdom I - Princess Storm.jpg +
InfoboxTemplate
Minifigure +
ShopDescription
Storm's prowess as a tournament fighter ha … Storm's prowess as a tournament fighter has led to her being a local celebrity in her kingdom, which she's okay with as long as she still gets to knock people into next week. Despite stepping away from her royal duties to pursue more knightly ones, sometimes Storm finds her courtly princess training hard to shake -- like how she'll make her pants, plume, and lipstick match even when she isnt trying to.pstick match even when she isnt trying to. +
Theme
Castle +
Title
Princess Storm +
Years
2000 +
Advertisement