Princess Verda[1] is a Kingdoms minifigure introduced in 2011. The only set that she has appeared in is 10223 Kingdoms Joust.

In LEGO Legacy: Heroes Unboxed, she is armed with a crossbow.

At the Royal Joust, the Royal Lion Knight and Falcon Knight compete to win Princess Verda's hand in marriage.[2]

Princess Verda's own kingdom was engulfed by the Dark Age, so she was sent away to the Western Kingdom for her protection. Upon realizing that Crown King Brutus did very little during his reign except indulge in his own luxuries, Verda decided to work constantly on improving the lives of the peasant folk. She is a talented politician and skilled with using a crossbow, and she survives by staying out of the public eye.

In the Glyph Hunt campaign, Crown King Brutus accuses her of being Willa the Witch in disguise, finding her helping the peasant folk to be suspicious, although Verda is revealed to be innocent. She temporarily joins the Explorers' party in mission 2.6. Afterward, Verda and Dragon Master Burnabus realize that "Brutus" was actually Willa, recognizing that the real king would be too lazy to personally lead a royal investigation. 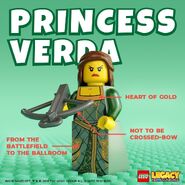 Verda and other Castle heroes in LEGO Legacy: Heroes Unboxed

Community content is available under CC-BY-SA unless otherwise noted.
... more about "Princess Verda"
RDF feed
Accessories
Crossbow (LEGO Legacy) +
Appearances
10223 Kingdoms Joust +
ArticleRating
4 +
Image
GreenPrincess.png +
InfoboxTemplate
Minifigure +
ShopDescription
A high-output attacker who survives by sta … A high-output attacker who survives by staying out of the public eye. As talented with politics as she is with a crossbow, Verda just might have the gumption to become the world's first princess president. It's about time!Trivia<br/>Quick-witted and compassionate, Verda was sent away from her kingdom for her own protection after it was swallowed up by the Dark Age. Verda was originally grateful to be taken into the home of King Brutus... until she realized he's a total putz. Unlike your average royal layabout, Verda spends her time tirelessly improving the lives of the peasant folk and figuring out how Brutus managed to spend half the treasury on a chocolate fountain.First-Term Princess<br/>Debuted in 2011.Jousting Around<br/>Only appeared in the "Kingdoms Joust" set.Emerald Emissary<br/>Her official minifigure name is "Green Princess."icial minifigure name is "Green Princess." +
Theme
Castle +
Title
Princess Verda +
Years
2011 +
Advertisement