Professor Henry Jones Sr. is Indiana Jones's father. He appears in the Indiana Jones and the Last Crusade subtheme.

His head is of an old man, with a grey mustache and white sideburns. One of the sides of his mouth is sloping upwards, detecting a smile. On his torso, he has the printing of his diary in a pocket, and a green bow-tie. The marking show three different layers of clothes, two dark sand, and one white. His legs have no markings, and are dark sand.

He is hired by Walter Donovan, who has found the tablet which may lead to the location of the secret Holy Grail. Henry later learns that his friend Elsa Schneider is a Nazi working for the other Nazis. After making this discovery, he is captured from his library, and taken to the Nazis headquarters. He is then rescued by his son Indiana Jones. Sr. then tells Indiana that the Grail must not get into the wrong hands and they head to Berlin where they try to complete their adventure. Once they make it the the Canyon of the Crescent Moon, Henry is shot; then when Indiana finds the grail he heals his father's wounds just in time to save his life. Years later in Kingdom of the Crystal Skull it is revealed that Henry died of old age, despite having drunk from the cup of Christ.

Henry with his son, Indiana Jones on the motorcycle chase 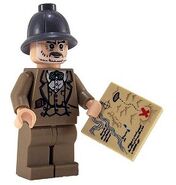