Professor Karkaroff, who also named Igor Karkaroff, is a Harry Potter minifigure introduced in 2005. He was the headmaster of the Durmstrang Institute, a wizarding school, and a Death Eater in the first wizard war. He only appears in 4768 The Durmstrang Ship and LEGO Harry Potter: Years 1-4.

As a young man, Igor Karkaroff was a Death Eater who served Lord Voldemort. After being captured and briefly imprisoned in Azkaban following his master's defeat, Karkaroff turned in several of his fellow Death Eaters in exchange for his freedom.
As well as being Headmaster of the school, he taught the Dark Arts subject at Durmstrang. On the night of the third Triwizard task, when his old master was reborn, the Dark Mark tattoo on his arm burned, telling him that Voldemort was back. Fearing that his former comrades would kill him if he went to the rendezvous, Karkaroff fled for his life. Roughly a year later, the Death Eaters hunted him to an old shack, and killed him. 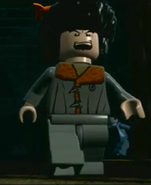