Professor Minerva McGonagall is the Transfiguration teacher at Hogwarts, and Head of Gryffindor house. She was first seen in 4729 Dumbledore's Office but has a new design in 4842 Hogwarts Castle with a fresh color headpiece.

The minifigure of McGonagall is basically what she looks like in the movie, it has emerald robes fastened together with a silver clasp at her neck and a green pointed Wizard Hat and cape. The minifigure head is a stern, prim expression showing her seriousness and practicality. In the film and in LEGO Harry Potter: Years 1-4 she wears spectacles but the minifigure does not have them. The second variant of McGonagall was released in 2010. The main difference between the two McGonagall's is that the more recent one is a darker green. The design of the dress piece remains the same (but darker), as does the silver clasp, but her face has a new design and she has a dark green cape.

Professor Minerva McGonagall is the Transfiguration Professor, Head of Gryffindor House, former Deputy Headmistress, and Headmistress of Hogwarts. She is also an Animagus, taking the form of a tabby cat. McGonagall was a member of both the First and Second Order of the Phoenix, an organisation led by Albus Dumbledore in order to oppose Lord Voldemort. She also strongly opposed Dolores Umbridge's reign of tyranny at Hogwarts as the High Inquisitor and then Headmistress. McGonagall fought in the Battle of Hogwarts along with other wizards.

Professor McGonagall appeared as a playable character in LEGO Harry Potter: Years 1-4. Her token, which allows the player to purchase the character in Diagon Alley, can be found in the Transfiguration classroom. To get it, the player must complete the transfiguration lesson. They must then come back to the transfiguration classroom after learning Reducto in year 4. The player can then use this spell to open a locked door and access a room where they can complete a challenge from McGonagall. As a reward, they will receive the token. As McGonagall, the player can use every spell with the exception of Avada Kedavra and Crucio. Being an Animagus, McGonagall can transform into a cat as a special ability.

In LEGO Harry Potter: Years 5-7, McGonagall is available in two other variations. They are McGonagall (Black) and (Pyjamas). She can once again use all spells, with the exception of Dark Magic. 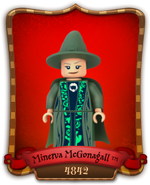 Professor McGonagall as she appears in the video game 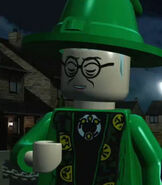 McGonagall in the video game

McGonagall with a wand

McGonagall on the cover on the Fall 2010 catalog